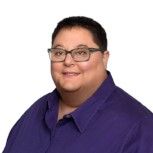 Stephanie joined Catholic Charities in 1999. She has served the agency in a variety of positions, including Housing Specialist for the Assisted Housing and Health Programs and as Case Manager for the Rita da Cascia Program. She has dedicated her career to serving the marginally housed and homeless populations in San Francisco, particularly those with HIV/AIDS and those who are dually or triply diagnosed.

Stephanie has served on numerous committees during her tenure at Catholic Charities including the Core Values Committee, the Move Committee, the Data Management Focus Group, and the Quality Assurance Team.