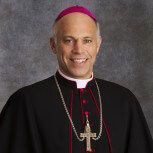 Archbishop Cordileoni became the Chairman of the Catholic Charities Board of Directors in 2012. On July 27, 2012, he was appointed the Archbishop of San Francisco and was installed on October 4, 2012, the Feast of St. Francis of Assisi, at the Cathedral of St. Mary of the Assumption. As the new Metropolitan Archbishop of the Province of San Francisco, Archbishop Cordileone received the pallium from Pope Francis in Rome on June 29, 2013. He is also a member of the Board of Trustees, Catholic University of America; the Governing Board of the International Theological Institute; and the Subcommission on the Liturgy for the Anglican Ordinariates.