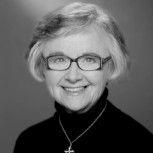 Sister Maureen joined the Board in 2014. Sister Maureen earned both her Bachelor’s degree and teaching credential from Dominican College. She was an elementary school educator in California for five years prior to earning a certification as a hospital chaplain and a Master’s degree in Pastoral Ministry from the University of San Francisco. Her experience in healthcare includes more than fifteen years of ministry in pastoral care and chaplaincy in hospitals in Nevada and California. For over ten years Sister Maureen ministered as a vocations promoter, both for the Diocese of Sacramento and for her congregation. Prior to taking office for her first term as Prioress General in 2009, she served as the Vice President of Sponsorship for Saint Mary’s Regional Medical Center in Reno, Nevada. Sister Maureen lives at Dominican Convent in San Rafael.